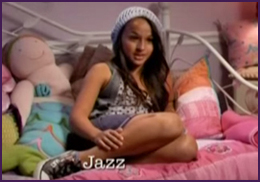 In the documentary special “I AM JAZZ: A Family in Transition,” follows the life of an extraordinary family and their transgendered daughter. 11-year-old Jazz and her family face a life-altering decision as the ebullient tween approaches puberty. Through extensive archival family footage and first-person interviews, Jazz and her family share their powerful personal story as they grapple with the possibility of hormone blocking therapy and issues related to fertility, discrimination and identity. The special is directed by Jen Stocks and executive produced by Bill Hayes, Kirk Streb, Wayne Mahon and Mark Gottwald, Figure 8 Films.

Watch the pilot episode of the documentary special ““I AM JAZZ: A Family in Transition” below:

Watch the deleted scenes from the  pilot episode of the documentary special “I AM JAZZ: A Family in Transition.”

Jazz’s father, Greg, reveals his initial feelings about having a transgender child. The encore presentation TBA on OWN: Oprah Winfrey Network.“I AM JAZZ: A Family in Transition.”

Jeanette is the mother of Jazz – a child who suffers from gender identity disorder. Since Jazz first started exhibiting signs of being a girl when he was genetically born a boy, Jeanette has kept a journal. Watch as she reads the emotional entries from the early years of Jazz’s transition. The encore presentation TBA on OWN: Oprah Winfrey Network.“I AM JAZZ: A Family in Transition.”

OWN: Oprah Winfrey Network
“I am Jazz: A Family in Transition”
Jessica Boyer, Manager, Communications
(323) 602-5624 • jessica_boyer@own.tv
About World of Wonder
Innovative production company World of Wonder is behind such entertaining hit series as “Girls Who Like Boys Who Like Boys” (Sundance Channel), “RuPaul’s Drag Race” (Logo), “Million Dollar Listing” (Bravo), “The Fabulous Beekman Boys” (Planet Green), and “Finding Sarah” (OWN). World of Wonder has also created award winning films and documentaries such as “Inside Deep Throat”, “The Eyes of Tammy Faye”, “Party Monster”, “Monica in Black and White”, and “The Last Beekeeper”, which won a 2010 Emmy® Award for Outstanding Nature Programming. They recently premiered their latest documentary “The Strange History of Don’t Ask, Don’t Tell” for HBO, which chronicles the repeal of the controversial military policy. Most recently, their 2011 Sundance Film Festival hit “Becoming Chaz

” and HBO special “Wishful Drinking” both garnered a total of five Emmy® nominations.