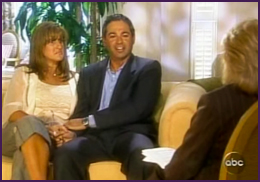 From the moment we’re born, our gender identity is no secret. We’re either a boy or a girl. Gender organizes our world into pink or blue. As we grow up, most of us naturally fit into our gender roles. Girls wear dresses and play with dolls. For boys, it’s pants and trucks.

“A phase is called a phase because it is just that. It ends. And this is not ending. This is just getting stronger,” Renee Jennings told ABC News’ Barbara Walters. The Jennings asked that “20/20” not disclose their real name in order to protect the identity of their 6-year old transgender daughter, Jazz.

Most transgender children still live in the shadows, hiding from a world that sees them as freaks of nature. Rejected by their families, many grow up hating their bodies, and fall victim to high rates of depression, drug abuse, violence and suicide.


Today, hundreds of families with transgender children — who have found each other over the Internet — are taking a dramatically different course. They’re allowing their children to live in the gender they identify with in order to save them from a future of heartache and pain.

“I think we’re a very normal family,” said Renee’s husband, Scott. “I think we have a very healthy marriage. We love to watch our children in all of their activities, whether it’s at school, or on the field playing sports.”

On the surface, the Jennings and their four children are a typical American family. But their youngest child, Jazz, is only in kindergarten, and already she is one of the youngest known cases of an early transition from male to female.

“We’ll say things like, ‘You’re special. God made you special.’ Because there aren’t very many little girls out there that have a penis,” said Renee.

“Renee and I are in 100 percent agreement as to how we should raise Jazz,” said Scott. “We don’t encourage, we support. And we just keep listening to what she tells us.”

From the moment he could speak, Jazz made it clear he wanted to wear a dress. At only 15 months, he would unsnap his onesies to make it look like a dress. When his parents praised Jazz as a “good boy,” he would correct them, saying he was a good girl.

The Jennings wanted to believe it would pass. Scott said he “was in a bit of denial” about what Jazz was trying to tell them. After all, even their rowdy twin boys, who are two years older than Jazz, had painted their nails growing up. But Jazz kept gravitating to girl things, insisting that his penis was a mistake.

When Jazz was two, he asked his mother a question that left her numb and frozen. “[He] said, ‘Mommy, when’s the good fairy going to come with her magic wand and change, you know, my genitalia?” according to Renee.

Troubled by her son’s behavior, Renee eventually consulted her copy of the Diagnostic and Statistical Manual or DSM-IV, the book used by psychologists and psychiatrists to identify mental disorders. She read the entry for Gender Identity Disorder (GID), with alarming familiarity.

The DSM-IV says a diagnosis for GID can be made if: (1) someone has a strong and persistent cross-gender identification; (2) feels a persistent discomfort with his or her sex; (3) this discomfort is not due to being intersex or hermaphroditic; and (4) the discomfort causes significant distress or impairment in their life.

Even Jazz’s pediatrician told the Jennings that they had a serious problem on their hands. According to Renee, their doctor said, “‘Yes, I believe your child has gender identity disorder, and I recommend that you go to a professional.’ And I was — my mouth opened up and you literally had to scrape me off the floor,” Renee said.

No one knows why children like Jazz are transgender — there are only theories. Through the first eight weeks of pregnancy, all fetuses’ brains look exactly the same: female, nature’s default position.

Only after testosterone surges in the womb do male brains start to develop differently. Some scientists suggest that a hormone imbalance during this stage of development stamped the brains of transgender children with the wrong gender imprint.

With Jazz’s diagnosis at hand, the Jennings explained the situation to their other children. In their home, they came to accept Jazz as a girl. There he could wear a dress or dance as a ballerina, although they still referred to Jazz with male pronouns.

In public, they kept Jazz’s look more ambiguous or gender neutral, especially at preschool, where he was allowed to put on a pretty top but he had to wear pants. Officially, Jazz remained a boy.

Jazz chafed under that arrangement. He wasn’t happy until he could present as a girl both indoors and outdoors. Everyday became a struggle, according to Renee. Finally, a dance recital opened the Jennings’ eyes to just how unhappy Jazz was.

“She wasn’t allowed to wear a tutu, like the rest of the girls. And she just kind of stood there and snapped her finger and did the tapping thing with the toe, and just looked so sad,” Renee recalled. “It was heartbreaking to watch. Really heartbreaking.”

The dance recital was a turning point. The Jennings then made the difficult decision to let their son become their daughter. On his fifth birthday, Jazz wore a girl’s one-piece bathing suit. “He” was now “she,” and an innocent pool party became a “coming out” to all of her friends.

“They referred to her as a boy. But kids are very accepting at that age. They believe what you tell them. She is a boy but she wants to be a girl, so we let her wear a bathing suit,” said Renee.

“That was the first time in front of everybody, she … announced to the world, that she was a girl,” Scott added.

Living As A Girl

So how does a 5-year-old biological boy begin living as a girl? For Jazz, it meant growing her hair out, piercing her ears, and wearing dresses everywhere — even to kindergarten.

At school, Jazz is registered as a boy. Her teachers know she’s biologically male, but most of her classmates don’t. She’s lucky because there’s a unisex bathroom and in sports, unisex teams. But even play dates are an issue.

Renee said, “I don’t want to send Jazz over to anybody’s house unless they know the truth. Nor will I let a child walk into our house, and play with Jazz, unless it’s been explained to them.”

Jazz’s physical safety is always on Scott’s mind. He worries about teasing, taunting, or worse. “Every day I’m afraid that I might get a call that something happened.

But what we’ve tried to do for Jazz is give her as much self-esteem as we can. We have older brothers, and an older sister, that are always looking out for her. Keeping their eyes on her.”

After months of careful deliberation, the Jennings agreed to participate in Barbara Walters’ special on transgender children, in the hope that doing so would further understanding of Jazz and others like her.

“I don’t feel like you can capture the true essence of a child like Jazz until you see her in her environment doing things that she would normally do. It makes it a lot more believable,” said Scott.

Jazz’s bedroom is filled with things one would find in a typical girl’s room: dresses in the closet, pink and purple sheets, and a bed overflowing with stuffed animals. There are also mermaids — lots and lots of mermaids.

Asked why she liked mermaids so much, Jazz said, “Because they’re different than us.” She added, “They have tails.”

“All of the male to female younger transgender children are obsessed with mermaids,” said Renee. “It’s because of the ambiguous genitalia. There’s nothing below the waist but a tail. And how appealing is that for somebody who doesn’t like what’s down there?”

Jazz told Walters that she was very happy being a girl, and that she always thought of herself as one. When people ask her whether she’s a boy or a girl, Jazz answers without any hesitation: a girl.

Jazz also showed Walters a drawing of a little girl with a tear-streaked face. Jazz drew it when she was in pre-school and still dressing as a boy. Asked by Walters why the little girl was crying, Jazz said, “Because she wants to wear the dress to school.”

Now allowed to wear a dress, Renee reports that Jazz enjoys going to school and has lots of friends. If Jazz hadn’t been allowed to transition, Renee said, Jazz today would be “very depressed” and “suffering.”

The Child That Never Was

For all intents and purposes, Jazz is a girl. But underneath her frilly dresses, she still has the body of a boy, and puberty looms large over the horizon.

“This child will come into my bedroom in the middle of the night, [and say] ‘Mommy, mommy, I had a bad dream that I had a beard and moustache like daddy, and I don’t ever want to have a beard or a moustache,'” Renee said.

In order to prevent Jazz’s nightmare from becoming a reality, the Jennings will probably allow her to undergo hormone therapy when she reaches puberty. First, Jazz’s doctor will prescribe blockers that will stop her from growing body hair and developing other masculine characteristics.

A few years after beginning that regimen, Jazz will start taking estrogen, which will allow her body to go through a form of female puberty. She will grow breasts and her body fat will move to her hips. Most doctors will not perform sex reassignment surgery until the age of consent, 18. The Jennings say that if Jazz chooses to also take that step, they will fully support her. But they are also mindful of keeping all of Jazz’s options open.

“We check in with her all the time,” Renee said. “I tell her, I say, ‘Jazz, if you ever feel like you want to dress like a boy again, cut your hair, you just let me know.’ And she goes, ‘Mommy, why would I want to do that?'”

While Jazz’s parents now fully accept their son as their daughter, the transition has not been without considerable doubt and stress. Many parents grieve for the child that never was. “I mourn the loss of the idea of my son,” Renee said. “I see pictures and the video, and that child’s gone. But there’s a wonderful person now that’s with us.”

By any measure, the Jennings home is a happy place. Kids play, kids fight. For now, Jazz lives safely inside a bubble, but the enormity of Jazz’s situation is not lost on her parents.

“I always say that I’m in the front line. Jazz is protected, because she’s not getting the slack, because I am putting out the fires before they burn her,” said Renee. “I want to pave the way for a better life for her, and any trans kids. They didn’t ask to be born this way.”